When I went to Mirela's to make the rose petal jam, I met Diana, who looks rather like a brown and white English sheep dog but is a Lagotto Romagnola, the breed used in Italy for truffle hunting.

I also met Luciano, the goose, who is in love with Diana. He grooms her - picking bits off her coat, puts food in her mouth and, when she's fed up with his attentions and goes to hide, he follows after her, squaking and trying to fly.

Nobody has yet told poor Luciano that he's not a dog...or that sweet Diana is not a goose! 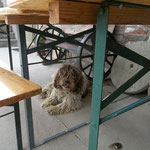 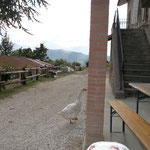 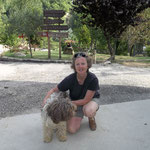